Fresh air is also my route for some quick tranquility, while my cat is hit or miss…  No, it is really nice that he greets at the door every night.  My biggest unwinder though is cycling, which is amazing for burning off energy and getting focused.  For example, I have a history department interview concerning teaching approaching, so this morning I rode to Worden, took a quick nap, and was ready to get to work.  Other times I might pull novel I’ve ignored too long off my shelf, call home, or put in a film.  Baseball and a craft beer.  Gardening will be another once I am no longer apartment-bound.  Busy yes, but I’ve always made the time when it’s important to me.

This week was relatively lax while in between classes so I had a full day to myself.  Devising my own field trip Wednesday, I hopped an early Metra from the ruralness of Illinois into St. Louis while taking another chunk out of The Hero with a Thousand Faces.  The history museum, I discovered, is showing America I Am, an African-American history exhibit.

How great to just run into!  It was outstanding- the first half’s recreation of the Middle Passage I thought was especially emotive; Rosa Parks’ arrest card made me pause, and anything associated with Fredrick Douglass is a thrill (sort of neat sharing a birthday with a personal hero), while Prince’s guitar from the 2007 Super Bowl recalled the best memory of an otherwise soggy game.  Best yet, I can call it all “research” as I’m going to suggest to my cooperating teacher that it be an early class excursion.  Perhaps you have something you collect from each place you visit?  Alright, perhaps if I were to begin again I would chose differently, but I’m now bound to tradition: yes, magnets.  Picked another up.  At least I can say I have the best traveled refrigerator in the Metro East.  (Such a memento of Napoleon is why I remember the title from last winter). 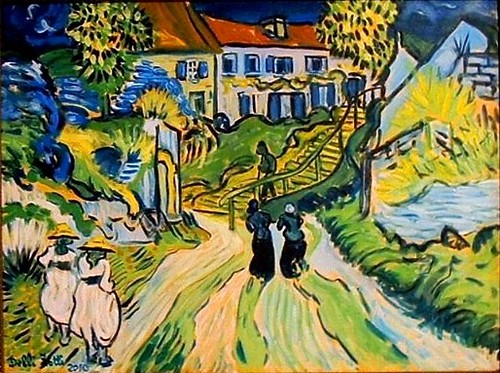 Then it was on to the art.  I have my favorites I try to make the rounds to, like Chagall’s Temptation, the antebellum Americana of the George Caleb Binghams, The Judgment of Paris and the Reclining Pan (?), but I’m most taken with Van Gogh’s Stairway at Avers.  I’m with you about the contemporary art- I try my best to be artistically amenable too, but the suit-on-a-hanger stuff on the second floor was passed by for another day.  Yet how perfect was this: on the ride in I reached the “Road of Trials” section in THWATF, figuratively illustrated with The Temptation of St. Anthony, noticing at the time it is indeed a German Renaissance engraving.  Was it there?  Yep!  To see it made my day.

On the way to the court paintings I stopped in the small room devoted to Classical statuary.  I wondered how tantalizing it must be to have mere fragments to display and study, as with Artemis.  I also liked the commentary on the preoccupation of later Roman eyes in contrast to the focused gaze of previous eras.  The Mississippi Valley presentation was indeed impressive in its scope, and I watched the restoration work for a bit.  My favorite profs have their doors and offices stuffed with quotes and examples of art, and that’s how I want my classroom to be, so I picked up a few postcards and things for my desk. I’m just taking classes at the moment, three others that that would all fall under classroom management and diversity; it’s made me very aware of the exceptional needs of today’s students.  Sad, really.  I don’t think I’ve told you yet where I’m teaching (observed/taught in the spring as well).  I’m assigned to Collinsville High and a “third-track” class comprised of struggling students the district is simply trying to retain until graduation (Most come from the Cahokia Mounds neighborhood if you remember it, and East St. Louis).  A challenge, but also the best opportunity to learn; I also couldn’t ask for a better cooperating teacher.  As for the program itself I finally certify in December.  One benefit of such an extensive program is most states will defer to Illinois’ higher standards allowing me the freedom to go pretty much anywhere.  Realistically my English services might be more in demand but I’m open to any kind of school whether public or private, as long as it has strong leadership and a clear mission that puts the students first.

Your story of towing your family to see the museum’s mummies made me smile, as I similarly implored mine last year to see a Picasso, Matisse, and Chigall show in Peoria.  My dad, admittedly a bit in over his head, sincerely asked a curator, “Can you tell me please, am I supposed to like this?”  Another modern critic…  This last trip Dad predictably wanted to catch up over coffee, talk football, and show off his new yard putterings, while with Mom I played a few board games while discussing her fifth-grade English class.  My sister and I went to Bishop Hill for the day, which is a faded Swedish colony that is our nearest cultural source this side of an Ann Sather.  It was forged by either brave religious dissenters or crazy people kicked out by the king, depending on who you ask.  Like Brits absconding with uprooted mummies at the gunpoint of colonialism everyone’s got a story.

A fun, sci-fi-tastic question now: make your case that Star Wars are the best films ever (and can you do it without using the term “monomyth”?).