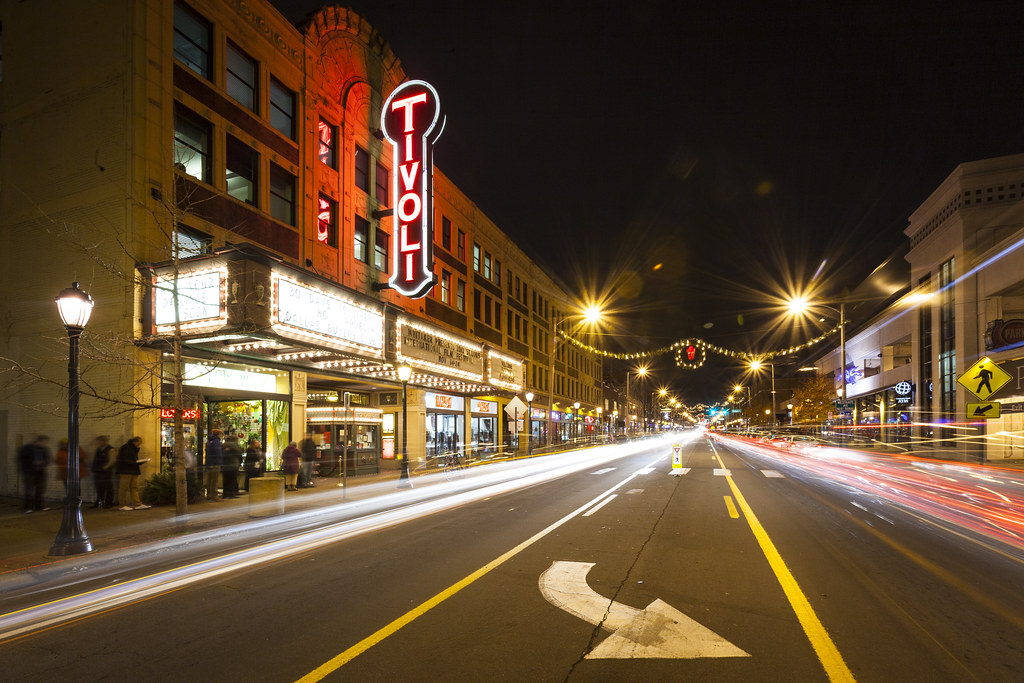 Last night while on the Loop, flagging down people for Grassroots Campaigns with a wave and smile to ask “Hi! Would you like to help gay rights?” I felt like Kevin Costner before his last pitch in For Love of the Game, summoning whatever gumption of goodwill I had left.  And, really, it was all still in me. But a lot of drive had also been sweated out over the course of a long, hot summer.  Anyway, I too kind of knew my “arm” was gone, without much power or control left, after well more than a thousand flag-downs since May, and I couldn’t get the “Hi! Would you…” words out the same.  I was a big piece of well-cooked beef in a blue ACLU t-shirt, ready to be served. It was my last night, I realized, as I stood there on Delmar, just steps west of the Tivoli Theater as it slowly turned to dusk.  Funny, I thought, this is the exact spot I began my canvassing career too.  Fitting. This sort of seemed to make it official, gave the plan a seal of approval.  And it gave me a shot of energy to get through the night, savoring the Lastness of it all.

Because I have not yet mentioned my summer work, I will explain it in two parts.  First, I loved the energetic young people I worked with.  My schedule was perfect: rise at ten in the morning, be at the office at the Landing (downtown across from the Arch next to the river), where we would practice our spiels and charity appeals.  Then we would normally break out into two, perhaps three groups, for always same few, more progressive areas in St. Louis: Delmar Loop with broke hipsters and artists, the quieter ethnic mix of my own South Grand, the gleaming posh shops and eateries of the Central West End, and finally the Grove, the city’s rehabilitating gay neighborhood. We would be out on the street seven hours, and usually be back to the office by ten. Then home to Tower Grove by eleven.

I seemed by luck to have hit upon the right cultural moment too.  Just before beginning work first Joe Biden, on May 6th, and then Barack Obama on May 9th, gave their public support of gay marriage.  So I felt I was riding the crest of a cultural wave, doing my own tiny part to help out at this same moment.  We would stand at an assigned spot and welcome passers-by to give a few dollars, with the goal each day of $200.  I made the canvassing squad my second day out, hitting my probation-trainee minimum  of $65. I really loved my work, the routine, with enough adventure each day to keep me energized.  I was also amazed and gratified to meet so many strange, original people cut from so many cloths.  For every brush by, I was also able to speak with many teenagers, locals, hippies, smartly dressed business people, the homeless that frequent my neighborhood, on top of the so many gay men and lesbians I got to hear from. And besides a few people wanting to state they could not support the effort because of their personal beliefs, in every instance it was a respectful interaction. I was never yelled at, or protested for publically supporting a view not everyone shares–that’s why I call this summer a success. Also, it helped me understand all the better the true prevalence and scope of gay and lesbian lives across our society and within countless, if not most, American families.  I may not have done much, but untold other, often small public acts has shifted perceptions over the decade, and this kind of open support and open living has normalized and explained away the unknown or bizarre.  I cannot go further than these thoughts, however, because I cannot really know what it was like in previous decades, or what it is like to work at this for years or longer. But it has been heartening to give of some time and effort towards the cause.  While I will always remember a woman stopping on her walk home, in the CWE, to give me thousand dollar check, it is trumped with thoughts of Metra rides to and from the city sites with my co-workers, the coming and going of staff, the ever increasing heat, and even the silly ice breakers in a circle before heading out and even the epidemic of high fives everyone gave.

Standing on Delmar outside the Tivoli as the Sun Sets #2

The down-slope for me came by two sore spots.  The first, ironically, was our weekend canvassing of St. Louis’ Pride Fest, held two blocks from my home in Tower Grove Park.  It seemed we had every reason to have a productive, lucrative few days.  Instead I barely collected anything, my worst stretch of the summer.  More than anything it sort of confused me.  I don’t really have any conclusions to draw, because it was a very small sample size, but I was still left to wonder, clueless, why most of us were getting passed over.  Perhaps the Fest was thought more of a party, a celebration, yet there was a lot of activism too.  Oh well.

My canvassing amounts seems small and petty, I know, but that is what I have to report.  More broadly, optimistically, and importantly, the White House was, somewhat surprisingly but appreciatively, bathed in rainbow lights at this same moment, on the night of June 26th.

Back to my small quibbles, my second plummeting of enthusiasm came on the Fourth of July, for which we stayed in the Landing.  People were there to dance, to drink, walk around in face paint, and make their way to and from a Cardinals game.  That day I made a dollar.  One dollar.  I know, it sounds like a joke.  More over, the other people I was working this kept getting huge donations, so I eventually found myself flitting round, searching after the light that kept moving.  It’s funny, now, I guess. But it also became apparent by July that we had perhaps canvassed all the St. Louis willing. People began to say to me “I get asked every day” or “I gave to one of you guys on Grand.” It donned on the managers that we might have squeezed the city of its possibilities. The only recourse, however, was just continue on, and stick more to the training script, while allowed for bursts of personality. Hm. For reasons like this, I never entirely bought into the “process,” the “method,” as if you can always, with the quality of words alone  prompt someone to give.  At least that’s not usually me.  Some had the magic, and could perform with such a high consistency that there seemed to be truth to their words.  While understanding all this, effort should always be given, but luck plays into it as well, the person’s particular financial willingness, state, or sense of empathy.

Standing on Delmar outside the Tivoli as the Sun Sets #3

On top of this, the city went to a boil after the Fourth.  The days after we were out for six hours when it was 109 degrees.  Strangely, we got called off the next day when it was down to 106; I think they realized we could be out there, but no one else was going to be, and it wasn’t worth of salary paid.  But fair enough.  And this and more is what I thought of, this, my last night with Grassroots.  It was a blast, and my nomadic life continues on.

I’m one for small mementos.  Perhaps it was noticed I retained a program from the Chinese Lantern Festival. Last night being my final turn of Community Helpering with Grassroots Campaigns, I took a little paper sun from the office that commemorated my record for a day’s canvassing (now a prompt for future successes).  Perhaps we can call the sketch of our morning “Quietly Caffeinated” or “Latte Hawking.”  But I am reforming in my ways, I suppose.  I am now minus a voice mail that kindly mentioned enjoying a past email and offered to speak later. It shall become a habit (a sarcasm-free statement).

The small, flora-hidden diamond-cottage in the rough is not unlike its owner.  For your office perhaps have never so many brilliant thoughts occurred per square foot.  If some characters held over from Twin Peaks think the barista’s job description is part librarian-shushing, and others cannot comprehend essential individualism (and the inherent sexiness) in a styling choice, oh well, we can laugh and carry on.   Yes, time rocketing forward due to fun remains a truism.