May Peckham arrived at my Magnolia Avenue door at nine o’clock sharp.  This was not her intention.  Ever since the previous calamity of being four minutes late, she had made it her prerogative to never let such a thing happen again, for some reason.  Yet she did not want to arrive too early.  No one, however, had told the traffic lights, and they gave her unfettered greens throughout her route.

However flustered she may have been as she climbed the stairs to my apartment, she retained her usual radiance.  Her hair had been parted and smoothed, like always, clad in a draping blouse and form-fitting jeans.  With a hug (not a handshake, as I was soon to learn had been our initial greeting to my chagrin) and a kiss we were on our way.  We had a lot to make up for, enduring a self-imposed no-communication Thursday.

The plan, as it loosely stood, called for going to the Soulard Market in the historic French district near the river.  We found a spot (soon enough), and without the necessity to parallel very much.  Being a few blocks from the market granted a short walk along quaint, Federal-styled homes.  Of course I like anything with some age and dust to it, and I was happy to hear it was quite reminiscent of New England, with the buildings almost flush to the street.  Several structures complete with lookouts caught our eye, including a red-painted abode and a neighboring, humble cottage we agreed was perfect.

Soon however we came upon… people.  Professors or students were not seen, thankfully, but now it was time to take May’s hand and guide her through the long halls or vendors hawking everything from hot sauce to a revealing Cardinals swimming suit I would be a fan of, if May wore it. 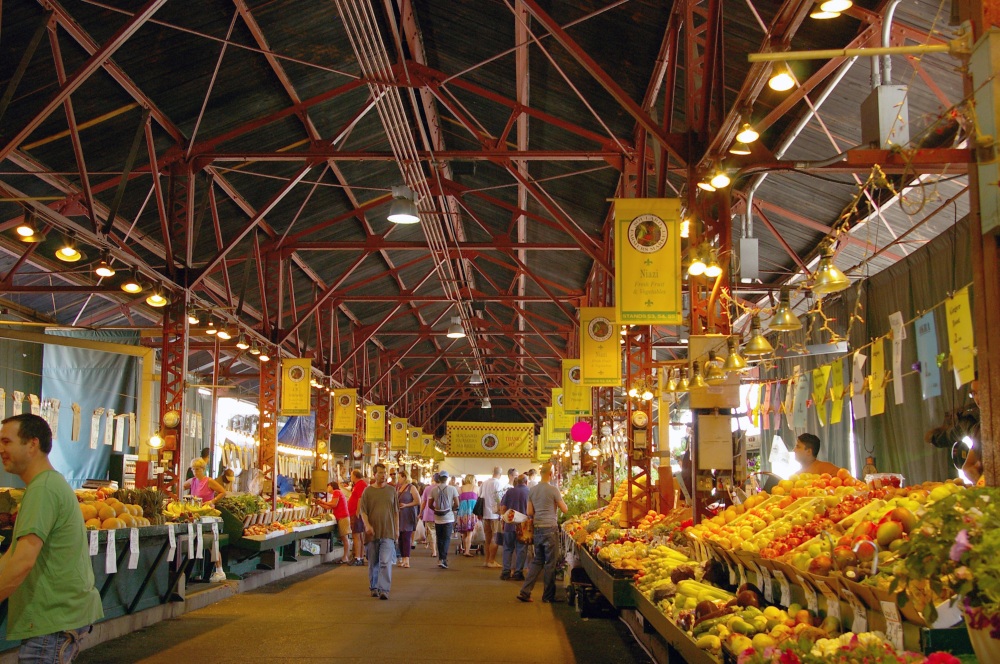 The goal, beyond taking in the sights and smells of fresh mums or pushed-upon peaches, was to create a phenomenal brunch.  Eggs became our menu’s canvas into which we could splash green onions and peppers, plus yellow tomatoes for the princely sun of $1.75 (May’s signature, sweet contribution, other than the great tomato bread, and green onions.  Okay, she gets all the credit… But I chose brown eggs, the state egg of Rhode Island, I believe).  Normal people may have conceded with Swiss or Gouda, but not us.  We went all in with an $11 piece of Brie goat cheese.  To round out the meal we chose some blueberries to go with our guilt peaches, and a bit of sweetness: a cinnamon bun for me and baklava for the well-traveled lady.  Which, now that I think of it, was our brunch’s dessert, suggested by me. 🙂

Bags in hand, with only a stumble or two, and an ‘oh-excuse-me’-or three, we found my trusty 300 and we were away, leaving the charming French neighborhood or my own German residence.

I mentioned as we unpacked our fresh wares that I had been complimented once on my eggs in the past (“so fluffy!”), so I quickly found myself cracking shells.  May made quick work of the produce and then watched with a smile.   This was my first chance at culinary accomplishment after my arugula crash-and-burn.  With a “focused, serious” face I flew around the kitchen, plating pouring, and placing before Ms. Peckham.  I am happy to her earned her praise (again).  As we ate we talked about times in our youth we surprised our parents with meals, and continued our Bleak House discussion (as I see more why May might choose Esther as her favorite character).  It was so nice watching part of the series with her.

“Should we do more??”  was the question.  A definite yes.

I had something of an idea, suggesting we go to the art museum.  Talking of crazy friends and the many texts they can send, and what May says of me (we actually go out and do things- like hike!).  Parking near the history museum, we wound our way through the park, again hand-in-hand, up a lush green Art Hill and finally past the imposing statue of St. Louis.

The main hall had gone “minimalist,” and we made our way first through a gallery of perverse German paintings.  May had guessed I would like the depictions of scenery, like a foggy Monet work or the giant works of Romanticism, and while it earned a rare “I like it,” Van Gogh’s Stairway at Auvers retains my gold.  I was a little thrilled to earn an “that’s an interesting observation” when I noticed the Dali-like detail (minus the signature surrealism).  The next painting we analyzed was Hubert Robert’s French 1789 Fantastic View of Tivoli (an amazing and dramatic scene depicting the crumbling or the old order amidst violent revolution and the struggle of nature… also known as “this one.”)  By chance, it was the very painting May had once given a presentation on, and listening to her cultured musings, it struck me this was the very reason I was looking forward to strolling the museum with her.  So commenced a talk on Romanticism, her favorite era, chalk full of “Wadsworth, Keats, and Coleridge.”  Romanticism, those were the days…  For my own interjection, I suggested a comparison between Tivoli and Pater’s Repose in a Park of better days.

Someone was forced to paint a whiter-than-Eric Archbishop of York and a “sly” Cardinal Rochechouart.  May helped me eye the details of Artemis, and pointed out the shitiness of Greek art as compared to Roman (a swear!).  Bypassing the furniture and silver ware- besides noticing/honoring the Wedgwood- the rest of the museum flashed by.  Not dwelling for six hours meant the cafe and it’s ten dollar turkey clubs could be saved for visiting parents who love such things.