My first look at the United Kingdom had to wait until this morning, although we had reached Land’s End (a fantastic name, the southwestern-most extension of England) and Cardiff to the north, yesterday.  My only view last night could be from the GPS in sonar that I have used to track most of the trip. The decks outside the ship are secured, meaning restricted, due to high winds and heavy seas (except for of course one small section, to appease the large smoking population).

Just coming out of berthing this morning I was told I would be able to see Ireland on the left, Scotland to the right.  Quickly going outside, I swung open the ship’s hatch to have revealed on both sides low craggy peaks of what looked like hardened sand, sprinkled liberally with coal.  Actually, the scene was similar to the old strip-mining areas near when I grew up.  Dense clouds sealed the entire world from the sun.  To confirm where we were I consulted the GPS again, but my friend had mistaken Ireland for the Isle of Arran, a western Scottish island.  I spent much of the morning on the flight deck as we sailed the Firth of Clyde, nearing our destination, finally.  Houses began to appear along the coast, then small villages, as well as two ancient castles overlooking the water.  The lands grew greener and forested, as we passed by a large town nestled at the base of high hills.  As I eagerly took in the sight I wanted to be walking along those streets, wandering aimlessly without a destination ever in mind.  I wanted to be in those steep dark elevations, climbing from one low peak to another, just because they were there.  As the tugs came along side of us, their drivers were the first Scots I saw, and I studied their face.  Did they look European, Will’s imagination asked him?  Well enough, anyway.  I searched for differences, large and small, that set them apart from what I was accustomed.  I might as well come clean–I had the urge, even the hope, that they knew how better to do things.  Not these tug captains, no, and not even necessarily Scotland, but a foreign people, with their own way about them.  I needed to know if, or where, there is a better mouse trap in the world.

As it really does not hinder my story, and because it is perhaps the prime bit of information that a higher up would not want passed on, I will not name where we piered the ship.  It’s a big secret (or something)!  But like I said, it doesn’t hurt the story any.  Now, if I were a tourist or a vacationer I would have grabbed my bags and hurried to the cruise liner’s brow to be courteously seen off by the captain, being wished fair a trip.  But I– we all– are sailors, and instead we grabbed many bags of trash and unloaded them from the ship. A watch at the brow told us, helpfully, to “hurry the fuck up.”  Yes, I know a few will read this and wonder why I write this so depressingly, but it is the truth and as it happened, so it is how it must be told.  If more sailors on the Elrod used two-syllable words I would add them just as readily.

Our four days in western Scotland was to be a working port, not a liberty one.  That means there was to be a “stores unload,” which is a strange term because we’re actually bringing food onto the ship, but I will stop with the parsing and semantics.  Unloads bring aboard everything we eat: the  eggs, tapioca, the cucumbers, and the frying lard, passed along from one to another until the cavernous, empty pantry for 200 people is again full.  The good news was many of these foods were of course made in the UK, so our diets would change a bit in the coming weeks, and any alteration is always welcome.  Not done yet though. Oh no, not at all.

Then came the safety brief: various well-worn warnings of the pits and pratfalls of stepping into a strange, strange land; from the merely unwise to the unlawful it was all covered, again, including what could happen following nuclear fallout (heaven help me…).

Cards were passed out to all, with numbers to call in the event of an emergency, and we all had to sign a muster that we had indeed seen said Video of Multitudinous Dangers (yes, odd, I know, for those of you civilians in the crowd).  The ship was being unduly daring, actually,  by allowing the drinking age to be lowered for the crew to eighteen.  Now, finally, at 1930 hours we were allowed to enjoy our nights in the great country of Scotland.

Hurry, before they tell us to buff the anchor!!  And watch out for nuclear fallout, people!

A line of taxis were waiting for us as numerous groups descended upon them in the dark, the cabs speeding off on the left side towards the nearby town of Helensburgh to the south, which took a little getting used to.  I went out with Patrick Clifford as part of my three-person-minimum group.  It was to be a shorter night still as Cliff had to be back early for something he was doing in the morning.  I had duty the next day and wouldn’t be able to leave the ship, but I understood. 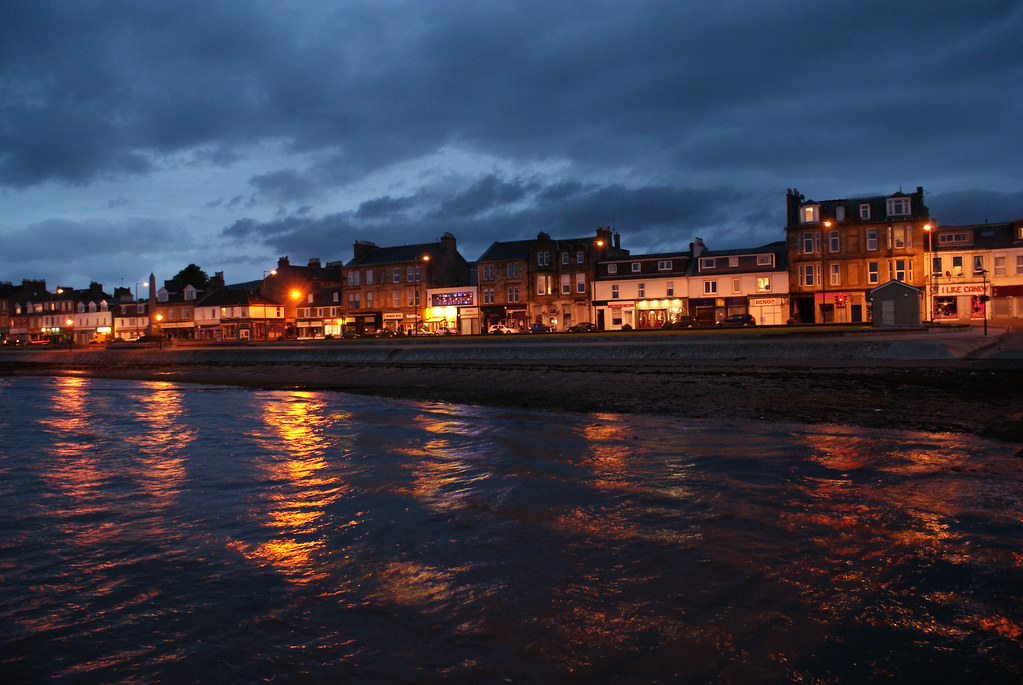 We were still able to slip away from the naval throngs and find a place that we could hide amidst the locals, called Reuters.  I busied myself with learning the way of the pound and pence, now nearly twice of valued as our U.S. dollar, as I loaded the pool table.  Drawing the balls from inside the table I discovered them to be only two colors, yellow and red.  They were significantly smaller than ours, and with the shorted stick and playing surface, that we had to effectively learn the game all over again.

A group of the indigenous sitting at a nearby booth heard us talking and quickly asked if we were American.  One wanted to know if we knew any Friends actors.  Another matter was, “So then, do yah like George Bush?”  To the surprising sounds of Steve Miller, Bob Marley and Kanye West we danced a little before leaving to get some fish n’ chips.  Before fully regaining our land legs we once again found ourselves on the ship, just after eleven.